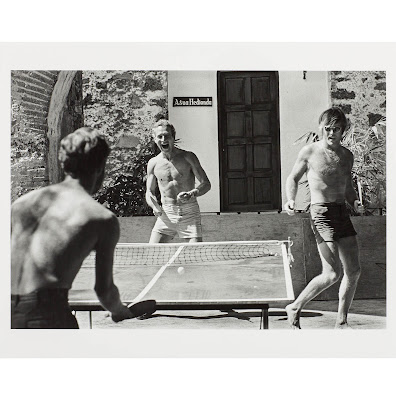 "(…)In the car, Redford, scowling, complains at length about film critics and writers.

"Ah, nobody reads that shit," Newman scoffs. "But also, I guess it's kind of hard on journalists. I'm sure there are a lot of times in the Time/Life situations where you're sucked into a common form. The real bad ones, I gather, are the ladies magazines——Home Journal, Redbook——"

"It's funny—the critics for Time magazine, the movie critics there all seem interchangeable. It's because the style is so definite. They must impose a style."

"Hah!" Newman snorts. "I took off on Jay Cocks on the Cavett show. I did him in."

"Yeah, he's a punk, Cocks. He's one of those guys who's never been anywhere. He's never been to the Bahamas, and yet he wears leathers, long hair, you know … Again, those guys who want to be in Hollywood, I wish they'd just go and settle there and write a script or whatever it is they want to do."

"I said the worst thing about Cocks," Newman says with a ghoulish cackle. "I said he's cute. He writes cute. That's really got to set the guy on edge, you know. That must be the worst thing you could call a writer.

"The thing is, when they're really down on something, they——Take Gamma Rays, which I just did with Joanne [Woodward, Newman's wife]. Vincent Canby of the Times obviously hated the play. He hated the play so badly that he was stammering. He hated the play so much he couldn't see the movie. To the point where there was nothing in the picture. I shot it in Bridgeport, you know, and I filmed what was there. It's a terribly depressing little town—the mayor calls it the armpit of New England. But Canby had to hate everything about the picture, so in his review he even had to quarrel with my choice of where to shoot it. Whew—such bullshit." Newman grimaces and drains off the last of his beer.

"Well, I think the end of us all is going to be Pauline Kael," Redford mutters darkly as the limo swings into the auto portal at the hotel. "She claimed that in the end of Jeremiah Johnson, I was giving the Indian the finger. The finger, for Christ's sake."

Newman laughs and stretches forth his hand: "In the last scene? When you were going like this?"

"Yeah, I just reached my hand out. That, she claimed, was the final blow, the final insult. When I read that, I realized that she was so out of line, she was so bent that she's probably a woman who ought to be locked up somewhere, you know. When you get that balled up, it's bye-bye time. (…)"