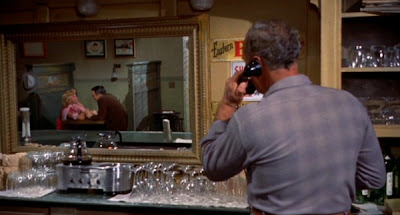 
Written on the Wind (1957) is the story of a super-rich family. Robert Stack is the son, who was never as good, in any way, as his friend, Rock Hudson. Robert Stack knows how to spend his money: he flies aeroplanes, drinks, lays girls; Rock Hudson is his constant companion. But they are not happy. There's no love in their lives. Then they meet Lauren Bacall. Naturally she is different from all other women. She's straightforward, works for her living, is practical, she's tender and understanding. And yet she chooses the bad guy, Robert, although the good guy, Rock, would suit her much better. Rock has to work for his living too, is practical, understanding and big-hearted, like her. She picks the one with whom things can't possibly work out in the long run. When Lauren Bacall meets Robert Stack's father for the first time she asks him to give Robert another chance. It's disgusting the way the kind lady kicks the good guy in the balls to set things up for the bad guy. Yes indeed, everything is bound to go wrong. Let's hope so. Dorothy Malone, the sister, is the only one who is in love with the right person, i.e. Rock Hudson, and she stands by her love which is ridiculous, of course. It has to be ridiculous when everyone else thinks their surrogate actions are the real thing, it is quite clear that everything she does, she does it because she can't have the real thing.

Lauren Bacall is a surrogate for Robert Stack because he must know he will never be able to love her, and vice versa. And the father has an oil derrick in his hand which looks like a surrogate cock. And when Dorothy Malone at the end, sole surviving member of the family, has this cock in her hand it is at least as wretched as the television set which Jane Wyman gets for Christmas. Which is a surrogate for the fuck her children begrudge her just as Dorothy Malone's oil empire is a surrogate for Rock Hudson. I hope she won't make it and will go mad like Marianne Koch in Interlude. For Douglas Sirk, madness is a sign of hope, I think.

Rock Hudson in Written on the Wind is all in all the most pig-headed bastard in the world. How can he possibly not feel something of the longing Dorothy Malone has for him? She offers herself, goes after guys who look vaguely like him so as to make him understand. And all he can say is 'I could never satisfy you'. God knows, he could. White Dorothy is dancing in her room, dancing the dance of a corpse - maybe that's the moment her madness begins -, her father dies. He dies because he is guilty. He has always fostered the belief in his real children that Rock Hudson was better than them, until in the end he really was. Because he could never do what he wanted himself and he had always thought Rock's father, who had never made any money and could go hunting whenever he wanted to go hunting, was better than he was. The children are just poor, dumb pigeons. Probably he understands his guilt and it kills him. In any case, the spectator understands it. His dead isn't terrible.

Because Robert doesn't love Lauren he wants a child by her. Or because Robert has had no chance to achieve anything, he wants at least to father a child. But his efforts reveal a fatal weakness. Robert starts drinking again. Now it becomes clear that Lauren Bacall is no use to her husband. Instead of drinking with him, understanding something of his pain, she becomes nobler and purer than ever, she makes us feel more and more sick and we can see more and more clearly how well she would get on with Rock Hudson, who also makes us feel sick and is also noble. People who are brought up to be useful, with their heads full of manipulated dreams, are always screwed up. If Lauren Bacall had lived with Robert Stack, instead of living next to him, through him, and for him then he might have believed that the child she is expecting is really his. He wouldn't have had to suffer. But, as it is, the child belongs more to Rock in actual fact, although he never slept with Lauren.

Dorothy does something bad, she sets her brother against Lauren and Rock. All the same, I love her as I rarely love anyone in the cinema, as a spectator I follow with Douglas Sirk the traces of human despair. In Written on the Wind the good, the 'normal', the 'beautiful' are always utterly revolting; the evil, the weak, the dissolute arouse one's compassion. Even for the manipulators of good.

And then again, the house in which it all takes place. Governed, so to speak, by one huge staircase. And mirros. And endless flowers. And gold. And coldness. A house such as one would build if one had a lot of money. A house with all the props that go with having real money, and in which one cannot feel at ease. It is like the Oktoberfest, where everything is colourful and in movement, and you feel as alone as everyone. Human emotions have to blossom in the strangest ways in the house Douglas Sirk had built for the Hadleys. Sirk's lighting is always as unnatural as possible. Shadows where there shouldn't be any make feelings plausible which one would rather have left unacknowledged. In the same way the camera angles in Written on the Wind are almost always tilted, mostly from below, so that the strange things in the story happen on the screen, not just in the spectator's head. Douglas Sirk's films liberate your head.