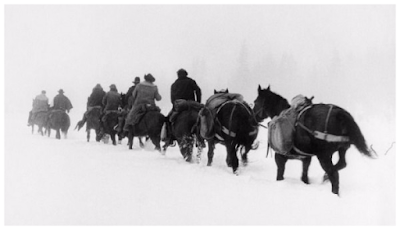 
Obviously, you returned to this country to do Day of the Outlaw.

No. I didn't know about Day of the Outlaw when I left Europe. When it came to me, I was glad I had come back. Timing. Luck again. The story was in the same vein I had been mining for some time. So, I changed horses and went to work instead of loafing.

The film was produced by Sidney Harmon, who was partnered with Philip Yordan, who is something of a mysterious figure in film history.

They were so mysterious, they didn't know who they were, nor were they aware of the potential of Day of the Outlaw. They didn't understand where I was heading - a sphere I had been exploring for some time: is it worse being the jailer, instead of the prisoner? Is it worse being incarcerated by white snow in white silence, or by the blankness of black silence?

With that frame of mind, I wanted to explore the bizarre situation of a group of outlaws on a getaway, terrorizing a small Western village, and then, by a quirk of nature, becoming equally the prisoners of a white silence in the middle of nowhere.

Which of the human flock would fall apart first under the tightening band of their communal deep-freeze?

I told UA what I was going to do and received synchronized shrugs and a 'go-ahead'. Yordan wasn't shrugging. It was a nervous tic he developed with my help. Sidney Harmon didn't count. Bob Ryan was already on the picture. He was a gentleman, a sincere human being - and what a good actor. He was with me all the way. Without him, I would've been laid out in the snow and counted out quickly.

Another problem popped up and it took their attention off the story. I wanted the town to be built and ready to shoot three, four months before the start date.

The only firm decision from the mystery duo I ever received - without ever being asked 'Why?' But Ryan and UA did ask me and OK'd the idea. I built a small Western town in my backyard, Oregon. But when they built it, they ignored the compass headings I had given them for the layout of the streets and they built the town in the wrong direction.

Shooting it as it was built would've added additional weeks to the shooting, so I ordered the damned joint to be rebuilt.

Yordan thought it would be easier to replace a director than rebuild the village. Sidney Harmon nodded with morbid-faced silence. This was Yordan's first open attempt to shed me - though many subsequent tries were to follow.

UA and Bob Ryan understood the short days of winter shooting, the saving it entailed using minimal artificial lights and the quality it gained. I didn't want the virgin snow to be defiled by the tracks of the poor electricians dragging cables and lamps on overtime.

What time of year was it when you built the town?

Fall. I wanted the weather, the rain and the snow to age the buildings, not painters' spray and cotton wool for snow on the roofs. The weather and the natural snow were cheaper than studio material and labor. Yordan finally bought that - not the quality, nor the reality it added. Money, he understood.

What specific problems where there in shooting at the height of winter?

None, if you PUT THE DRAMA WHERE IT BELONGS: IN FRONT OF THE CAMERA.

Tell me about Philip Yordan. Was he your sort of film-maker?

Well, he was a mixed-up fellow. Flighty but talented, he had brilliant ideas and a quicksilver mind, no question about that, but he had no staying power. He was a juggler with ideas and stories and people and the tax department. I had one especially big problem with him, which gave me problems with United Artists, too.

By then, color-mania reigned in the asylum. I didn't want to shoot this film in color. It was a story of tension and fear, survival in a prison of snow. Had I shot it in color, the green pine trees covered with snow, the soft glow of candles, the dancing tongues of flames in the fireplaces would have radiated warmth and safety and the joy of peace on earth. A 'Merry Christmas' card from fairy-tale land.

I wanted to shoot Day of the Outlaw with the harsh contrast of black and white.

'Oooooooh, but color films sell better!' cried Yordan, while Sidney Harmon nodded in solemn silence. I was in the kingdom of: 'But nobody will notice it...'

The very few things you shouldn't listen to, Herr Future Director, are the 'Aaaaah-why-don't-yous?' and 'Eeeeehs' and the 'Aaaah-but-nooooobody-will-notices...'

It's interesting, because some of the reviewers at the time remarked that it should have been shot in color. You can't win.

You can't lose either, if you don't lie to yourself.

Do you think a director should have the right to stand up and say, 'I made this film in this way because...'?

Of course, but that 'because' shouldn't be an alibi or an excuse. You're responsible only to yourself, Herr Future Director. Set your standard high and live up to it. Your standard, not 'theirs'.

In Day of the Outlaw, you were casting again against type with Burl Ives as the leader of the army of renegades. Deliberately, I assume?

When I see Burl Ives, I see a jovial fat man. What did you see in him that told you he could become a totally different categorization?

Don't believe in categorizing, don't be a surface-looker, Herr Future Director. Watch and try to look behind the masks people are wearing. That's my approach.

We just talked about The Two-Headed Spy. I had the identical problem in casting Ives in Day of the Outlaw as I had in casting Hawkins in The Two-Headed Spy, or Hayden in Crime Wave, Liz Scott in Pitfall, or Gary Cooper in Springfield Rifle. Maybe it's the wrong approach. I don't know. But ir's an approach I believe in.