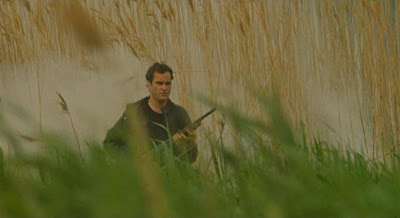 If We Own the Night seems to build toward a foregone conclusion, that is because predestination is its theme. This is, after all, the story of a black sheep’s inexorable return to the family fold.

“The movie is about fate,” Mr. Gray said. “I laugh when I hear people say it’s predictable. At the beginning of Henry IV Prince Hal turns to the audience and says, ‘I’m fooling around with my friend Falstaff now, but by the end of this play I will be the king.’ ” He added, “For me it comes from a view of history which is connected to class, where there’s a kind of helplessness to the way people’s lives unfold.”

We Own the Night not only deals explicitly with class — unusual in an American film — but also dares to insist that class mobility is a myth. “It’s so oppositional to the American idea of pulling yourself up by your bootstraps,” Mr. Gray said. “Maybe it seems like an ideological affront to some people.”

We Own the Night makes the most of seldom-seen locations, especially in the three action set pieces. To film a nerve-shredding drug bust, the production team found an actual stash house in Bedford-Stuyvesant, Brooklyn. The Bruckner Expressway in the Bronx is the scene of a rainy car chase reminiscent of The French Connection. And the final face-off unfolds in a patch of head-high reeds at Floyd Bennett Field, a former airport in Brooklyn. (One of the reasons it took years to get the film off the ground was Mr. Gray’s refusal to shoot any of it in Toronto.)

Like Mr. Gray’s other films We Own the Night strives for a heightened emotionality that often seems in conflict with its macho environment. “There’s surface subversive, where it’s worn on the sleeve,” he said. “Everyone wears a hat, the ending comes in the middle. What I prefer is where the subversiveness is almost a Trojan horse and is deeper within the film,” as in classical Hollywood cinema.

“There’s a repression about that period I find amazing,” he added. “You’ve got the ‘A’ story and then beneath that something totally at odds with it. You have a movie that exists on two planes.”

Mr. Gray is smart and neurotic enough both to complain about being misinterpreted and to know that he shouldn’t. He doesn’t want to sound defensive but can’t help griping about what he feels are wrongheaded criticisms.

To his chagrin the Variety review of his new movie called him out for using Blondie’s 1978 song “Heart of Glass” in the opening club scene. “The idea that if your film takes place in 1988 it should only have music from 1988 shows a totally limited sense of history and how history is an accumulation of details,” he said. “Is all your furniture from 2007?”

“That was a conscious George Bush comment,” Mr. Gray said. “But that’s not the filmmaker endorsing the behavior. One of the reasons Henry IV reverberated for me in the first place was the current White House.”