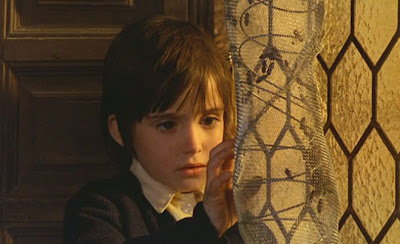 
VICTOR ERICE’S THE SPIRIT OF THE BEEHIVE

‘A work of art should also be “an object difficult to
pick up”.  It must protect itself from vulgar pawing,
which tarnishes and disfigures it.  It should be made
of such a shape that people don’t know which way to
hold it, which embarrasses and irritates critics,
incites them to be rude, but keeps it fresh.  The less
it’s understood, the slower it opens its petals, the
later it will fade.’
Jean Cocteau

I discovered Spirit of the Beehive through Nestor Almendros, who recommended the cinematographer Luis Cuadrado to me when I was about to make a film in Spain. He knew Cuadrado had lit the film when he was nearly blind, by having his assistant describe the sets to him, and telling him where to put the lights and the intensity of each. He didn’t know that Cuadrado had since died of a brain tumor.

I have now seen the film more than twenty times - more than any other of my favorite films. I never tire of it.  I discover something new each time I see it. It reveals its secrets slowly.

It is a secret and mysterious work, concerned with the biggest mysteries of all: creation and death. It is also concerned with family relationships - husband and wife, father and daughters, sister and sister – and with each character’s attempts to communicate, as well as with their ultimate isolation and loneliness. Finally, it is about cinema itself, and the power of cinema to invade our dreams and awaken our knowledge and fears.

There are no accidental images nor extraneous scenes. The opening shot of the father, his face distorted by the screen of the beekeeper’s hood, foreshadows the scene near the end where he becomes the Frankenstein monster in his daughter’s fantasy. In other scenes the children watch Dr. Frankenstein on screen create his monster from parts of bodies; then later they create their own monster in the classroom by adding heart, lungs and eyes to a chart of the human body.  Even the image of the hexagonal cells of the honeycombs is repeated in the small hexagonal window-panes and the hexagonal screening of the apiary.

The film opens with the arrival of a traveling projectionist at a small town in Spain during the early forties – his film is the original Frankestein, starring Boris Karloff. The central character in our film is a five-year-old girl, Ana, who along with her slightly older sister, Isabel, sees the movie Frankestein, and is profoundly affected by it. Ana is disturbed by the killing of the little girl in the film, and doesn’t understand why the monster is also killed. Isabel pretends to have the answers to Ana’s questions, but when pressed later, can say only that they’re not really dead.  It’s only a movie, and nothing is real. Besides, she’s seen the monster. He’s a spirit, and she can make him appear whenever she calls him.

In subsequent scenes, the children play with and at death. Isabel experimentally attempts to strangle her cat, stopping when the cat scratches her.  She applies the blood on her finger to her lips, as if it were lipstick. Later, she pretends to be dead to frighten Ana. Finally, Ana experiences the death of a real person, a deserter from the army whom she befriended. We feel Ana’s crisis as our own, for we have all passed from innocence to knowledge of mortality at some time in our own childhood.

The adults remain more enigmatic. The wife, Teresa, writes letters to a soldier, perhaps a former lover. The husband, Fernando, listens to a crystal radio before writing in his journal late at night, eventually falling asleep in his chair. Teresa goes to the train station to mail her letter, and sees another soldier sitting in the train as it slowly pulls away. They are separated by the glass window of the railway car as they watch each other, each in their own sound-proof universe, isolated.

The most difficult thing to portray in cinema is privacy. The very process of making films is public, with so many people looking on. Actors have been trained to communicate with the audience, so they too are uncomfortable just being. Many directors try to achieve this level of reality by using non-actors, but rarely successfully. Erice succeeds extraordinarily well, using professional actors. His greatest achievement is with the children, where there is a fine line between amateur and professional.

I regularly show the movie to each new group of my students.
One of them asked a question I had never thought about before: was the letter Teresa burns at the end to or from her lover? I looked at the scene again, and it's clear it's to, not from. My student also raised the question whether the deserter was Teresa's lover, which I couldn't answer. One of the greatnesses of Beehive is that it's completely without exposition, other than what would be revealed to an observer in life. Nothing is added purely for the benefit of the audience.