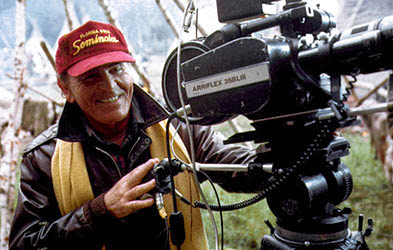 ENZO G. CASTELLARI... FIRST OF ALL I should let you know that the G in that name is very important. He almost killed me when I got this interview published in Argentina, and didn’t include the G on the cover of the magazine. It turned out that it came from his original surname: his real name is Enzo Girolami, and he was the son of famous Italian director Marino Girolami, which some of you might remember from movies like Cannibal Apocalypse (yes, the one starring John Saxon). I grew up watching Castellari movies like The Bronx Warriors and Thunder... At a time when we were all expecting a cool sequel to Escape from New York, Enzo came up with the closest thing. He even included cool American actors like Vic Morrow. Years went by and it turns out he was also responsible for impressive westerns like Keoma. A true classic, Keoma stars Franco Nero in one of his best performances and shouldn’t be missed at any cost. Castellari has directed movies in almost every genre imaginable and, unlike most Italian genre directors, he always came up with fun films. Even if it’s not one of his best, a Castellari movie is always fun to watch.

NICANOR LORETI How did you start working in the film business?

ENZO G. CASTELLARI I was basically born in the movie business. I spent all my childhood period visiting my father’s set. Then I started my first working experiences an extra, little roles... assistant director... editor... My father was my best teacher.

The Bronx films are truly cool. What was it like working with Vic Morrow, Henry Silva and Fred Williamson? Are they different from Italian movie stars?

I have wonderful memories of Vic Morrow. Extraordinary man. A truly professional person. He was my best friend. Henry Silva is a very nice man. A positive person to work with. Fred Williamson knows everything about the movie business and it was very easy to work with him. A real vacation! You have only mentioned these three actors, but I have worked with many known American actors. There is a big difference between Italian and American actors. The American actors come ‘to work’ — they respect the calls, the movie director’s decisions... instead, our Italian actors have a more ‘star’ attitude, except for Franco Nero. He is a real actor!

How did you get Mark Gregory to play Trash [in 1990: The Bronx Warriors]?

I met Mark [Marco De Gregorio] in my gym. He was seventeen years old then. He was always on the side and trained in silence. Marco had a wonderful athletic body. He was perfect for my Trash!

You’ve directed films based in a lot of different genres: westerns, sci fi, straight action, etc. Which genre do you prefer?

For a movie director like myself, I love to describe a story in a cinematographic way. First of all I have to be in love with the story, whatever the genre is... but it also has to include action sequences. Of course! The genre I prefer the most is the western. It is the genre that gave me the chance to direct my first movies. I will always have a special feeling towards the western genre.

High Crime includes a lot of amazing high speed chases that remind me of the style of John Frankenheimer. Did you have him in mind at the time or is it just a coincidence?

I adore Frankenheimer. He probably has influenced my way of doing cinema.

Franco Nero and Fernando Rey were in that one. What was it like working with them?

High Crime was our first movie. It was the first time I worked with Franco. Our friendship and esteem started immediately. We respected each other’s work and we collaborated with great pleasure. We both love the magic world of cinema. Fernando was a stupendous actor. Had a wonderful, classic style, a very elegant person and a great friend. A true professional.

What do you remember about the making of Scaramouche and working with Ursula Andress?

I do not have good memories about the filming of Scaramouche. For many reasons, which I prefer not to mention. Working with Ursula was just fantastic. She was the light that brought beauty to the film. No rivals. She was a wonderful woman, a nice person, a serious and professional actress. Day of the Cobra tells the story of corrupt bureau officers.

Do you research to tell real life stories like this one?

Tito Capri (the screenwriter I always worked with) and I do a lot of research together before we start to write a script. Our common friend, Nicola Longo (a professional police officer of the Italian Drug Enforcement) has always suggested and helped us to start and build our stories.

Franco Nero stars in that one; he had the reputation of a true professional. What was he really like?

Franco is an extraordinary professional actor. He falls in love with the story. From the first to the last frame. He is the most fantastic collaborator. We love to work together. He deeply loves the world of cinema. He is my best friend.

You worked with Bud Spencer and Philip Michael Thomas on the Extralarge tv series. Is it difficult making comedic action films? How did Bud and Philip get along?

If I like the script, whether it is comic or dramatic, I do not have any difficulties to film it. It is always a real pleasure to develop a film following my style. Working with Bud and Thomas was really fantastic! It was always a joy, while not forgetting the professional atmosphere. We worked one intensive year together. I also had other international stars involved in the filming of the six movies. Dionne Warwick, Christopher Atkins, Lou Ferrigno, Erik Estrada, Steven Andrews. Not to forget the German actors. Wonderful experience! Unique. I also had a great and fantastic American and Italian crew.

You worked on several movies with Fabrizio De Angelis. Could you describe your working relationship?

I do believe the three movies I filmed produced by Fabrizio are the perfect example of collaboration and respect there is between a producer and a movie director. He did give the wonderful chance to work using a lot of different variety of technical equipment. A dream for a movie director!

Sinbad of the Seven Seas featured lots of special effects. How hard is it having to deal with effects like that?

You have touched a delicate point. The film was interrupted when I had to start filming the visual special effects. The production company [Cannon] went bankrupt when I ended the shooting. The film was not complete. Cannon did not give me the chance to finish. Then many years pass by and I do see the film has been released on VHS. I manage to get a copy... I was very surprised to see that I even ‘produced’ the movie. Which is absolutely not true. I never watched the movie entirely. I only saw the first ten minutes. I could not believe my eyes! A real horror! The most disgusting movie I ever directed. Then I found out that Cozzi was called to direct the new ‘mother and daughter’ scenes instead of the visual special effects, which were essential for the movie. Result: disastrous!

Were you influenced by the Sinbad films of Ray Harryhausen?

I prefer not to continue with this topic. I hope you can understand. Thank you.

The one I do not like is Sinbad and the one I love the most is Keoma!

You’ve made several tv movies and miniseries. What’s the main difference between shooting for the big screen and the small screen?

There are no big differences with Extralarge. I did not film six tv episodes, but I filmed six different movies. The production companies and the tv channels involved in the tv miniseries today give little time and a very small amount of money. This is the major difference.

What do you think about the state of Italian cinema today?

What was it like working with James Franciscus in Great White? What was he like as an actor?

He was a great professional. He knew all he had to know about shooting a movie and could follow my commands and the camera movements without any problems. I remember that he proposed a change in the screenplay and came up with some dialogue for Vic Morrow, which was very good. Vic was very happy about this and also very grateful. James was truly a great actor.

Was it difficult shooting on the sea? Any complications?

Shooting on the sea is always very difficult because you’re always depending on the weather, on the wind, on the waves, things you cannot possibly dominate. We shot at the Mar Tirreno, in Italy, in Toscana and in Campania. Also in Georgia and Savannah in the US. Also in Malta, where we had the opportunity of using a big pool that had been built specifically for the film industry. Here we could master the waves and the wind as we pleased. In the middle we built the mechanical shark, which was used via remote control by the technicians.

There were rumors that Universal sued the producers due to similarities with Jaws. Is any of this true? What happened?

Yes, it’s all true. My movie opened only in Los Angeles and it grossed $2,200,000 in the first weekend. It was an extraordinary success, but it scared the people at Universal, who were preparing Jaws 3-D. So they tried to do a lot of things to shut down my movie, they came up with all kinds of excuses. They said there were a lot of similarities between my movie and the original Jaws... The blond girl, as in the first Jaws, it was a white shark, like in Jaws 1 and 2, etc. So they used their lawyers to stop my movie being screened. In three weeks it had grossed like $16 million. And then, Jaws 3 came out, and it turns out they had copied several scenes from my movie! The windsurfing scene, for example. In the end, the Americans had copied me!