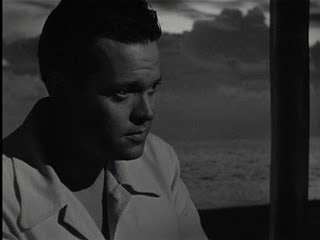 Once, off the hump of Brazil I saw the ocean so darkened with blood it was black and the sun fainting away over the lip of the sky. We'd put in at Fortaleza, and a few of us had lines out for a bit of idle fishing. It was me had the first strike. A shark it was. Then there was another, and another shark again, 'till all about, the sea was made of sharks and more sharks still, and no water at all. My shark had torn himself from the hook, and the scent, or maybe the stain it was, and him bleeding his life away drove the rest of them mad. Then the beasts to to eating each other. In their frenzy, they ate at themselves. You could feel the lust of murder like a wind stinging your eyes, and you could smell the death, reeking up out of the sea. I never saw anything worse... until this little picnic tonight. And you know, there wasn't one of them sharks in the whole crazy pack that survived.
Orson Welles, em The Lady from Shanghai
* sobre o filme, pouco tenho a dizer, porque pouco lhe pode fazer justiça. A frase resume a sua essência narrativa, que é um labirinto. São a montagem e a forma que tudo levam à frente, uma poesia enraivecida, a morte da star, como ideia, como instituição, as sombras, o escalar de violência expresso no suceder de planos, através de sobreposições, sombras e radicalismos formais. Hino à liberdade, hino ao Cinema..
Publicada por João Palhares em 16:44