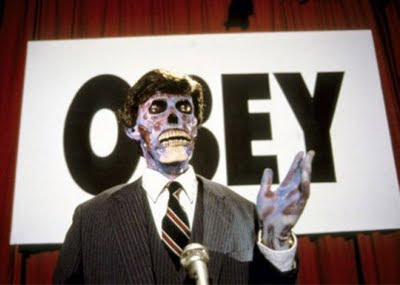 John Carpenter is a filmmaker who is unashamed to stay within the genres he loves (horror and science fiction) and who practices his trade like a master craftsman. His pictures always have a handmade quality—every cut, every move, every choice of framing and camera movement, not to mention every note of music (he composes his own scores) feels like it has been composed or placed by the filmmaker himself. His sense of composition (nearly all of his pictures are shot in 'Scope) is quite exacting and precise, and his control of movement inside and outside the frame can be hair-raising. There are so many moments in his films that are absolutely startling—the murder of the little girl with the ice-cream cone in Assault on Precinct 13; the appearances of Michael Myers on the very edge of the frame in Halloween; the appearances of the creature in his truly terrifying remake of The Thing. And the mood of his pictures is so carefully crafted and sustained. I'm a great admirer of The Fog, the mood of it, the sense of mystery. But I also love They Live, in which an alien invasion of America is uncovered by people living on the ragged edge of society in Los Angeles. This movie was Carpenter's commentary on what he saw as the excesses of the Reagan era, and the movie shares many qualities with pictures made during the Depression, such as Heroes for Sale and Wild Boys of the Road. It's lyrical and tough at the same time, with a strong sense of community among the displaced people living in makeshift homes on the outskirts of L.A. (interestingly, the picture dovetails with Mel Brooks' comedy Life Stinks, made a couple of years later), and the mood is unusually sad and bitter. The science-fiction element reveals itself as the story goes on: The "beautiful people" on TV and walking down Rodeo Drive are actually aliens, transmitting subliminal messages to the hypnotized masses, their true images visible through special glasses that are being handed out at a mission for the poor. I like the humor of the picture, the hilariously long fight scene between "Rowdy" Roddy Piper and Keith David, and the sense of outrage. They Live is one of the best films of a fine American director.
daqui